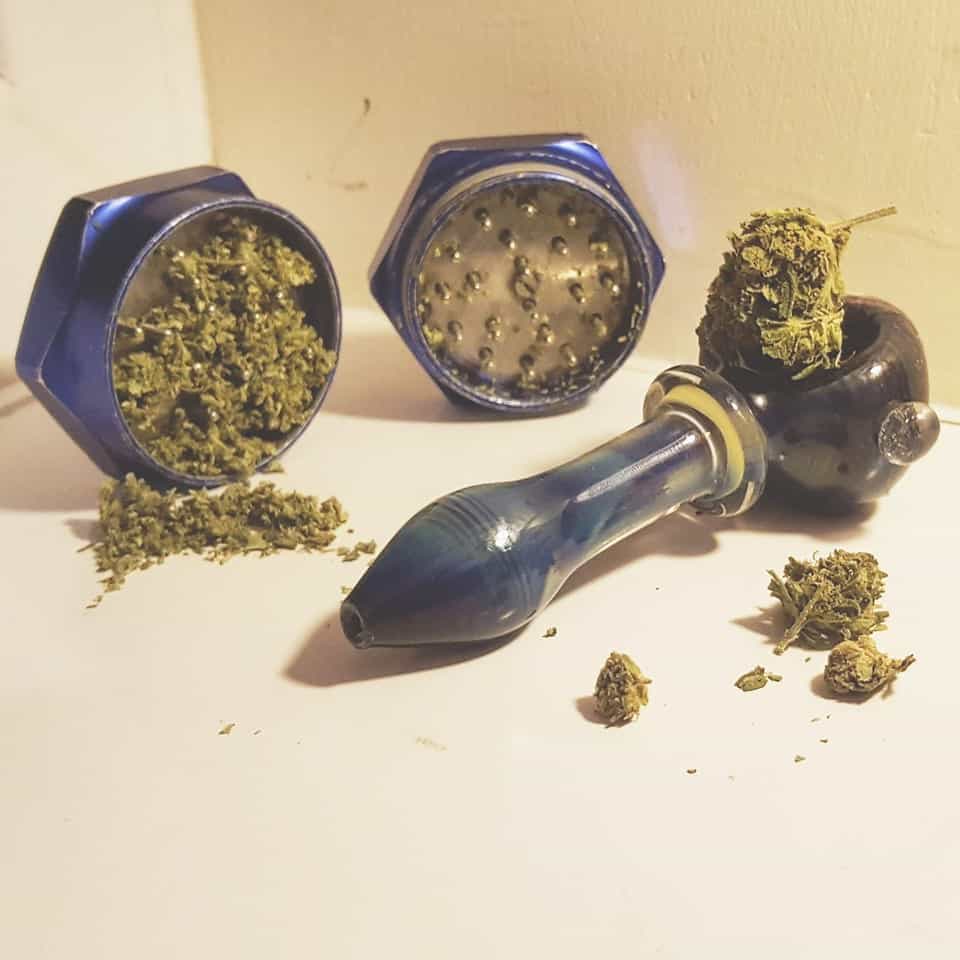 After many years, and countless different models, you eventually find that one perfect grinder. Everybody looks for slightly different things in their grinders, but most people agree on three things: It must have a crystal catcher, strong teeth that tear through bud without snapping and a design which doesn’t clog up after only a few uses.

In my personal opinion, there is one grinder which ticks all three of the boxes above, and then some. It is a grinder so perfectly designed that I would go as far to say it’s the best grinder I have ever, personally used. It is, of course, the Quick Grinder.

The Quick Grinder was designed by a Spanish company of the same name, based in Barcelona. It is a clunky little grinder made from aluminium and stainless steel.

Inside you find the impossibly hard steel teeth, which unlike most grinders aren’t toothed or tapered in any way 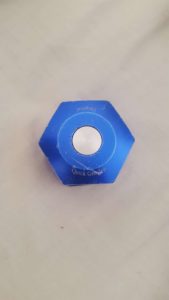 The grinder comes in several colors and is quite weighty for it’s size, probably the densest grinder we’ve ever used.

Inside you find the impossibly hard steel teeth, which unlike most grinders aren’t toothed or tapered in any way, merely straight with a rounded tip, much like you would find in a wooden grinder. In the center there is no magnet, just a flat-head screw which can be removed to clean the base-plate of the grinder.

Around the inner rim of the grinder runs a polythene joint which prevents the two parts of the grinder touching and grinding away at the aluminum body. The joint also allows the grinder to have a nice tight seal so secure that you can even store your bud in the grinder in your pocket and not have to worry about it opening and dumping the contents everywhere.

But none of this is really anything too special, and fails to explain the name of the piece. That’s where the button comes in.

The thing that really separates this piece of kit from most is the two little button you find on the top and bottom of the piece. These little buttons have two functions; Press both of the buttons at the same time and the grinder effortlessly pops open, and once open pressing one button will push your ground bud out of the grinder.

The next day after first fantasizing about such a grinder I found one in my local grow shop, it must have been fate. 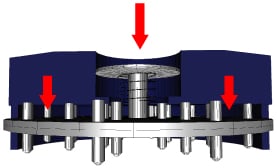 So before I go any further, I would like you to think back to every time you have used a grinder only to find half your bud mashed into the teeth, requiring you to either tap your bud out onto a tray or hard surface, or to try and prize it out from the teeth with a toothpick. I had this problem with every grinder I had ever used, and started to fantasize about a grinder which could use a small plate to push the herb out. The next day after first fantasizing about such a grinder I found one in my local grow shop, it must have been fate. 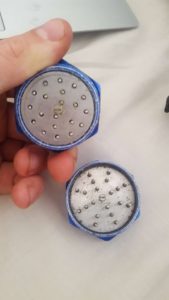 you can empty the bud directly into your hand while out and about, making rolling on the go infinitely easier.

The grinder was literally the grinder of my dreams, a sturdy metal piece which you could use in the street or anywhere you might not have a table to empty your grinder onto. By simply pushing the weed out of the device at the push of a spring loaded button you can empty the bud directly into your hand while out and about, making rolling on the go infinitely easier.

It is this ease of rolling on the go, and rapid emptying that earned this piece its name, the Quick Grinder.

The Quick Grinder has loads of small, impossibly hard, straight teeth. These teeth are not tapered in any way and are possibly the toughest grinder teeth I have ever come across. I have used my quick grinder exclusively for around two and a half years now and I have yet to snap or even bend a tooth, and Ive been shoving everything through there, from dry-dirt hash to multiple grams of seedy-stemmy bud! I have even out of bored curiosity ground up a small stone in there before, though I wouldn’t recommend this for obvious reasons.

The teeth hardly ever need cleaning too, as the holed base-plate usually scrapes 99% of the plant material off of the teeth and out of the grinder.

Whenever I show a friend my Quick Grinder, their first concern is ”where is the kief catcher” as it is obviously not a staged grinder. Yet, believe it or not, this grinder does have a sort of crystal catcher, whether it’s intentional or not I cant say, but it definitely works.

whether it’s intentional or not I cant say, but it definitely works. 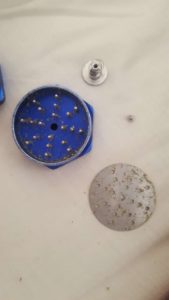 Under both of the base plates, small pieces of plant matter and kief can accumulate after falling through some of the tiny gaps around the holes in the plates. This kief is then compressed under the plate by the spring and when then plate is taken out will appear as a thick sticky layer of  dry sift hash, which in dire times can be smoked with a decent effect.

While this grinder is an absolutely incredible piece of engineering, it does of course come with some flaws too.

So the list of pros with regards to having this grinder, in my opinion vastly outweigh the cons, but this is an honest review.

The teeth are also insanely strong, capable of reducing up to 2g with the stems left in to a fine powder-like grind.

The pros of owning one of these devices is that they are extremely sturdy pieces of kit, I have dropped mine hundreds of times from heights as great as five meters, only to find a little superficial scratching and no damage to the mechanism. The teeth are also insanely strong, capable of reducing up to 2g with the stems left in to a fine powder-like grind. Yet for me one of the best pros to mention is the shape of the device, with it’s flattened edges, as this prevents the device from rolling away if knocked or dropped onto it’s side.

weighing in at a whopping 128g you will need a belt if you plan on carrying this guy in your pocket.

As we all know though, nothing is perfect. I would never call this grinder too good to be true, but there are a few issues me and some of my friends have pointed out. First is the biggest inconvenience, it’s weight. For a small grinder capable of fitting in your hand this thing is crazy dense, weighing in at a whopping 128g you will need a belt if you plan on carrying this guy in your pocket. Not only is she incredibly dense but after several weeks of use she can clog up and become tough to twist. While clogging is common for most grinders, it is particularly frustrating when it happens to the quick grinder as cleaning it requires you to remove two tiny-tiny screws, then the springs behind the buttons, the buttons themselves, and the base-plates, all without mixing up the screws, buttons or springs.

as the little screws fit perfectly into the grinder, screwing them in at an angle will make it impossible to fully tighten the base-plate to the button

It gets worse though, as the little screws fit perfectly into the grinder, screwing them in at an angle will make it impossible to fully tighten the base-plate to the button, meaning you have to undo the screw and try again. However the button spins as you attempt to remove the incorrectly-angled screw, leaving you to spend at least fifteen minutes trying to undo the thing only to put it back in correctly, by which point you have started shaking from such fiddly work.

The quick grinder does take a few days to get used to, but once used to it, it is hard to go back.

Another final con with the device is that its ability to grind several grams at once or even hash, relatively easily, means that you can break your friends grinders by shoving too much bud into them and breaking the shark/tapered teeth. However this does allow you to gloat about the sturdiness of the Quick Grinder.

Despite these issues, if you keep your quick grinder clean by soaking it regularly in ISO alcohol every couple of weeks you should be okay. The quick grinder does take a few days to get used to, but once used to it, it is hard to go back.

While it does have it’s flaws and traditional grinders provide much less of a learning curb, there is no denying the fundamental practicality and sturdiness of the quick grinder. Even though many people might not be a fan (especially of its aesthetic design), I haven’t used anything else for the past two years and don’t see that changing anytime soon.